NBA Playoff Beards: The Best and The Worst

With Tommy’s permission, Dusty will be commenting in these italics throughout the article (in fact, this is Dusty doing that now). I couldn’t help but talking about beards and the NBA, probably both in the my top ten topics if you ever broke down my personal zeitgeist by “time spent discussing.” Anyway, I’ll hand it back to Tommy…

Fact: I’ve only shaved my face with an actual blade 3 times in the last 2 years. Once was for a job interview. The second was for my Ace Ventura Halloween costume. The third was out of boredom I think.
Dusty – I personally think the third time is because he was so overwhlemed by the best start-up video of the year. (Tommy again…this is actually true).

Needless to say facial hair is a part of my life. In fact, I can only count a few times when I’ve seen my old man with anything less than a mustache. It’s a testament as a man to don a healthy beard. Among other things its something that separates us from the fairer sex. A well put-together beard says “I’m rugged, but I also pay attention to the details.”
Dusty – Schockingly, we are not sponsored by the Gillette  Fusion Proglide Styler.

I also have a love of sports and the superstitions that inevitably come with them. I wouldn’t call myself superstitious per se, but in the words of Michael Scott, “I’m a little-stitous.” Either way, I love the annual hockey playoff beards that come out this time of year. I even grow one myself and it unites me with my team in some weird way.

I started thinking, “You don’t really see a playoff beard in the NBA.” Why? I don’t have an answer for that. That doesn’t mean there aren’t some powerful (and shameful) facial hair(s?) on display in the NBA. Below is a collection of the Best and Worst facial hair examples in the NBA.

3rd: LeBron James – Dude, LeBron. Come on. Its like he wants a perfectly oval face and as his hair line fades back, he shaves his beard further down his face. It’s getting dangerously close to being a Neard. The Neard is not a good look for anyone, regardless of how much money you have. I’m trying to think of a beard joke that integrates not being able to finish the 4th quarter, but I’m drawing a blank. Dusty..anything?
Dusty – I have to admit a lack of objectivity when it comes to The Basketball Judas.  LeBron started growing facial hair at roughly the same time he started eating solid foods. He has the talent to be the greatest beard grower of all-time! Instead, we get a neard. It’s no coincidence that this neard didn’t come out until after he left Cleveland. His facial hair is the physical manifestation of his lost soul.

2nd: Kendrick Perkins – Hey Kendrick, you got your body into incredible shape (no homo), your game is average (more intimidation than raw basketball talent) but what the hell is that enormous, black cotton ball dangling off of your chin? It looks like all of the hair on your face melted together and slid down to your chin and decided it was the most fertile ground. The last time this type of intentional facial hair design was the Egyptians in 1000 B.C. My personal opinion, you’d look much better with a handle bar mustache. Pullin for you guys in the playoffs though buddy.
Dusty – Perk’s beard (I use the term loosely) is the single reason that Blake Griffin did this to him.

1st:  Joakim Noah – Where do I start? Let’s start at the point where the parts of your beard connect…wait…that’s impossible. This beard is like the “State” of Hawaii – a bunch of random shaped patches that don’t actually touch anywhere. (That’s slightly redundant since the definition of an island is a body of land surround by water, but you get my point). Here’s my advice, watch the video in the first link of this post, invest $1 a month and never grow facial hair again. Unless you’re dressing up as a gay French man for Halloween and you just want to let that weak mustache grow.
Dusty – I feel like if someone played word association with me, my insta-response to “French” would be “gay” (which is odd since I’ve never known a single French person). In all fairness to Joakim, his hair and face are so ugly that you barely notice the beard…check out this “fun with Noah’s hair article.”

3rd: Barron Davis – The modern day Baron has dialed the beard back a bit for  more of the John Legend look. But the Baron of old had a luscious beard that was equal parts Kimbo Slice and Rick Ross. If you put some big shades on Baron, he would look just like that ENORMOUS gold face Rick Ross wears around his neck. Look at the picture below. Much like our favorite beard of all time, Chuck Norris, “Even Baron’s beard has its own sweat glands”
Dusty – Baron’s beard guy coined the term “perfectly coiffed.” His beard is actually a great foil to LeBron’s neard. Physically out of shape and loafing through the regular season, Baron’s beard displays his inner confidence that has always made him great in the clutch.

2nd: Kevin Love – Well done, sir. Well done indeed. A threat every night for a double double. You’ve slimmed down, grew your hair out and stopped growing that damn chin strap line beard that probably got you laid by hundreds of Asian girls at UCLA. This beard isn’t particularly great by any stretch. So why is it number 2? I like to refer to this as the Every-Man’s beard. It just looks natural and unkempt like any average guy you might see (read: me and Dusty) who has decided to embrace his inner Bohemian and rock a beard with his t-shirt, jeans and a PBR.
Dusty – An every-man’s beard in the NBA is about as rare as, well, a good white player in the NBA. Rarefied with commonality, Kevin Love has the diamond of NBA beards…and as far as I’m concerned, it’s conflict-free.

1st: James Harden – I know what you’re thinking. “Damn, why is that picture below so big?” The answer: A beard that big deserves the full size picture that I copied from someone else’s website. Most people have a face with a beard. This is a damn BEARD with a face. It’s so perfectly groomed all while being Paul Bunyan long. It’s like he doesn’t even have a mouth until he has something to say, like his beard is actually talking to you. Combine that with the baux-hawk (black guy faux-hawk) – which was really big about 2 years ago and you have a man who is making a statement with the hair God blessed him with. “I’m a love, not a fighter. But my beard will kick your ass. So don’t mess with us.”
Dusty – Classic case of the beard growing the man. James Harden has improved every year in the NBA. Causal explanation? His beard’s been getting longer and thicker (I have a theory about dingleberries being beard Viagra, but the theory is actually more vulgar than that synopsis). I drop my razor to you, Mr. Harden.

As a special bonus…this guy isn’t even in the Association anymore and probably never should have been. But his facial hair, hair, fatness and overall face are just too much to leave off of this list.

Adam Morrison – I’m laughing too hard at this to even make a comment. This is a staged photo. He showed up to have his picture taken, for his player profile with this on his face. Question 1: Why is it so uneven? Question 2: If you touch it, will it bite you? The female cashier at WalMart had a more complete and better groomed goatee than this. Poor guy. I wish you the best of luck in Germany, Kazakistan or wherever you’re playing (or not) in the world today.
Dusty – No words, just emotions. 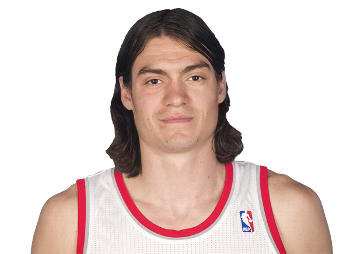 Thinking about growing a ‘stache,