The Better Part of Valor: Watching My Friends Run the Tough Mudder

Posted on November 27, 2013 by Dustin Riedesel | Leave a comment

From left to right: The Tiz, Big Phil, Burger, and BenSpann

How much would I have to pay you to drive several hours to run 12 miles through exorbitantly muddy conditions in chilly November temperatures? $20 for the novelty of it? Let’s sweeten the pot. I’ll include a dip in a sub 40-degree pool of water, zap you with electricity on multiple occasions, and if you cramp up, well, I have no contingency plan for you. Sorry. $50 is probably a solid compensation for that scenic walkabout. Would you do it for $50? Fine. I’ll throw in a beer and a commemorative t-shirt you can flaunt what a badass you are to everyone you know. Can I pay you to do this?

Wait, what? You’d like to pay me for organizing all this? $120 you say? I’ll cover gas and lodging of course…you’ll pay for that too? Welcome to the Tough Mudder my friend.

Sure, they look like happy guys. And why not? They chose to embark on this run. They’ve had a good night’s rest and a good morning’s breakfast. Pre-run, everyone’s happy. Including me. I staked out this view for the first obstacle:

So what if it was 10am. We’re all weekend warriors at this event. Also, I was dealing with a personal situation. The night before, we went to Sticky Fingers for some BBQ. The waitress asked what brought us in, and I said the Tough Mudder. The guys immediately clarify that I’m too scared to run. I don’t point out that scared isn’t a synonym for wise and instead take the abuse in jovial fashion. “Team mom” and “mascot” were some of the nicer terms. The waitress hears mascot and says I should dress up. The guys love the idea. I say I’d do it, thinking that nothing will come of it. Instead, we stop by Wal-Mart on the way back to the hotel, and they purchase me this little number: 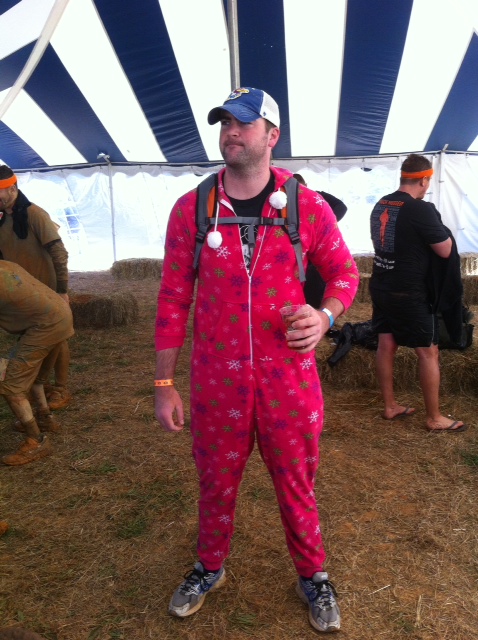 So the pre-10a beer is justified. Also, this made me a little bit of celebrity among race patrons as I was easy to spot, easy to approach, and easy on the eyes. I spent the first obstacle speaking to some ex-marine who was working security. He respected the onezie, gave me a map of the course and generally applauded my stance on not running.

Early on, standing in a pink onezie with multi-colored snowflakes, you think you’d feel a lot manlier if you ran. It’d probably be better for your self-esteem all-around to run. Especially cause the guys look pretty stoked about overcoming their first obstacle. I’ve never known what “warrior poets” are, but dammit if they didn’t look like them.

I walked the mile and a half to the next obstacle, the Arctic Enema, and immediately realize that the walk was exhausting, and the last thing I want to do is jump into a bucket of 35-degree water. I certainly wouldn’t have spent $7 for an ice bath at this point, which I kind of figured is the PPO (price per obstacle). 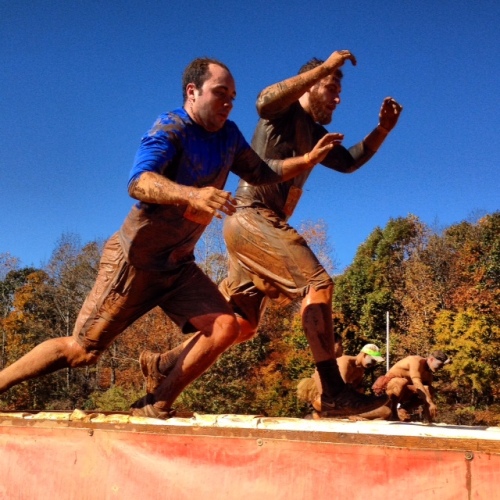 The shocked faces confirm my theory. Big Phil was really the star of the post-enema posing. He looked like the happiest house-dog that ever lived. Finally wet and muddy and in his element.

Then it was a waiting game. I walked back to get another beer, and then walked to intercept them at the next obstacle I could view, some wall-scaling thing. I was happy for this obstacle because it led to the following photo:

And the following conversation upon reviewing pics/vids in our hotel room:

Me: This is such a great shot of Burger’s butt.
BenSpann: Look at that butt!
Burger: What can I say man?
Me: Big Phil’s at just the right level!
BenSpann: Philly, you’re getting right up in there!
BigPhil: I was thinking about shinin’ the penny.
Me: [breathless laughter]

I’d never heard the phrase before, and I lived with Big Phil for almost four years. That’s the exact kind of gross word-gem you hope to mine out of these events.

Up to this point of the run, it’s been pretty casual. Sure, the guys were exhausted. I’ve seen geriatrics walk laps at the mall faster than they were running, but their spirits were high. It was probably this next event that began putting a damper on them. Tommy chronicled his own struggles with the Eel Crawl well, but when it comes to personal pleasure, it’s hard to beat the live screams of your friends. The Tiz has my favorite around the 21-second mark.

From there, it was a quick decline. The guys looked pretty haggard when I next saw them. I hate that I didn’t get BenSpann’s original cramping on video. It was a cite to be seen. We huddled over him and massaged his calves for 15 minutes, basically rubbing his will to continue back into his legs. All we have recorded is his gritty determination to overcome this final, nearly fatal obstacle:

The guys finished. Big Phil got electrocuted so bad on the final obstacle that he was knocked off his feet, and there was a legit 15 seconds where I didn’t know if he was getting back up. I’ve never laughed so hard. They finished, shivered, and looked pretty miserable.

Well, except Burger. He probably could have run another one right away. Did they inspire me to join them when they do it again? Nope. I liked my Team Mom role just fine. My boys made me so proud. 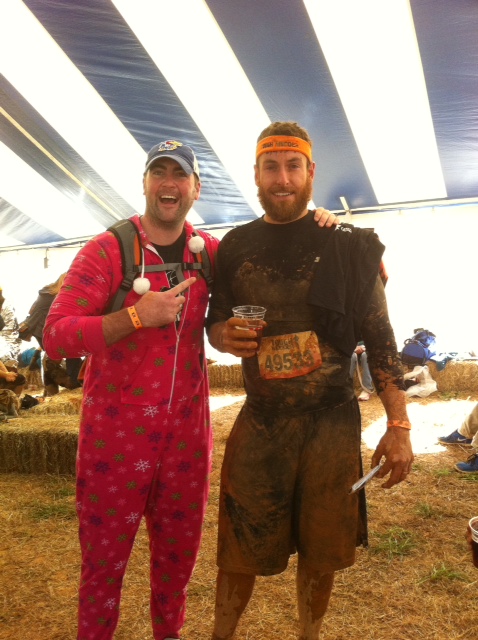 Yes ladies, I still own the onezie,
Dusty “weak and clean” Riedesel